Doing my daily adventure grind I was pondering why some situations suck and certain cards just seem like instant lose scenarios. Then I thought about how the same thing happens in pvp at times.

What I am talking about is certain cards like say Escipion or Atilla. Cards the have hard come into play abilities or hard static abilites. And the times that they hurt most is when you promptly deal with them and they get redrawn over and over. I'm talking about dealing with them 2,3, sometimes even 4 turns in a row. Losing in this manner is very ..... shall I say cheesy. It feels like you've been cheated, because you lost to the golden rng. Rng is part of the game and I like it. It is just hard to even have fun getting stomped by luck. I love a good hard fight and I don't mind losing, but losing an adventure day 1 due to repeated escipion or losing a pvp match due to atilla 4 turns in a row is a huge turn off.

So to my suggestion and I think it would be an easy change to the game that won't alter the current state of the game or the cards. Simply have players draw their next hand at the end of turn. That way there is no way of drawing a unit that you promoted, opposing player killed for whatever reason, and laughing at them when you redraw the same card the opponent possible spent his whole turn trying to remove. Of course you can still make players hands only viewable during that players turn.

Just a suggestion. Thanks for making the great game!
Top

First of all, thanks for this well written feedback, it's always a pleasure to read this kind of feedback.

I have to admit that it makes sense and it's indeed a very interesting and not too complex idea. The problem I see is that 1st, we know this game is more RNG reliable than the usual TCGs, and it's designed with that in mind too, so that you have to focus more on deckbuilding and card promotion management, we like how different this is from other TCGs and we are not very eager to make big changes in that matter, we do have plans to investigate how that affects our gameplay and we want to implement something similar for our future games but for the moment, we will prefer to hear more about what you guys think about this.

We will however add this to our backlog as a very possible feature for the future.

I'm not really sure if I'm for or against, but I'll give my 2 cents on it.

I do share Alabama's frustration in getting beaten down in adventures by returning Scipios; since Achilles seems to be included in every ai deck and there is no way to play around both it is an unpreventable loss (which I find more frustrating than those caused by my own stupidity

) to as he called it the golden rng. So for adventures I would support the suggestion, since those decks lack a reliable way to neutralize those problematic cards and your health is too precious to ignore them.

In PvP however I'm split; I find the biggest difference between experienced players and newbies is the way they deal with big threats. Newbies will usually look for a way to kill those cards (as you would in a conventional cardgame) risking a redraw and the more experienced players generally first look for a way to neutralize them (be it lowering attack, destroying gear, using walls, unblockable units etc.). The proposed change would affect all upgraded cards, since they will take a turn longer to return to your deck and make PvP even faster than the already pretty fast current meta.

This does of course leave a number of problematic cards (returning Attila would be my #1) that can't be handled this way. I would prefer a different way to handle these few cards and put the focus for this back to deckbuilding.

Before the last balance patch Saladin was a great counter to these select impactful, but expensive to upgrade, cards and I would love to see him restored to his former glory. Maybe a more easily obtained version of Sun Tzu (epic+ is INCREDIBLY hard to get) with a single target version of his skill would be a good addition as well. Then again, I would love these options regardless of whether or not this change would be implemented

I am with you guys, would be great if there were some more good counters to crazy redraws. Therefore i am introducing some useful cards from the other fs tcg WW2 to the discussion ...

Courageous Division
This unit has exactly the ability farmer mentioned and it is essential in any pvp deck in ww2 tcg.
Would be great seeing such a unit or another common hero costing 3/4 crystalls in Heroes Empire. 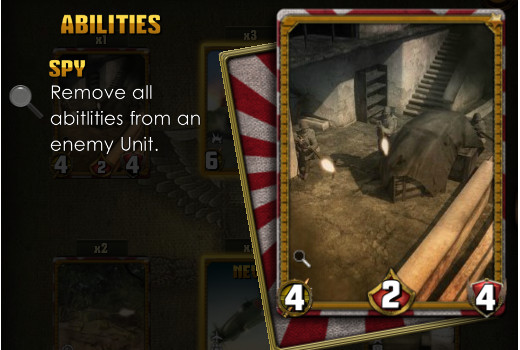 Better Equiped
That is an order which reduces the upgrading costs of units.
One might think some wonder that does kind of the same in heroes. 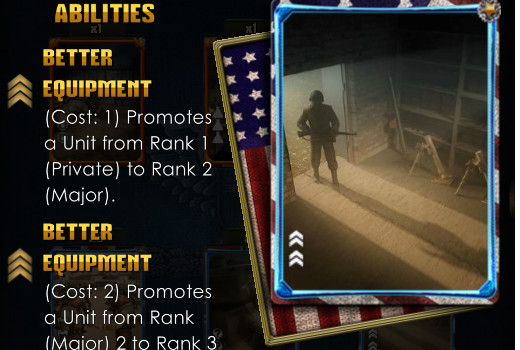 Flying Tigers
It is a special epic unit which can be played for free if the player has lower hp than the adversary.
Such a unit could help a lot to come back in lost game or to counter Attila redraws. 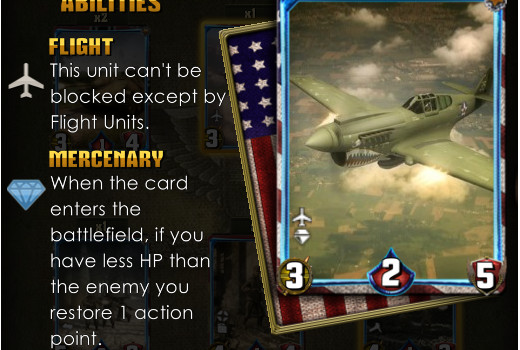 Yeh , would love to see a flying tiger here.
Especially since you have no card limit, it might be a fun way to play with them^^
A poor mans Sun-Tzu would be nice to have too

Definetly we will have this in mind for the new cards that will come! I agree we could benefit from some imports from WWIITCG cards.

Users browsing this forum: No registered users and 3 guests